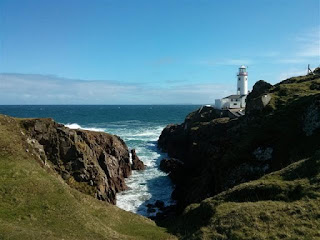 
We woke in our impromptu lay-by to a day of dank murk and drizzle. Emma was also pretty rough - worse than yesterday.

I figured it would be best to have a really steady day and so that's what we've done. Within an hour of departing our lay-by-of-despair we'd reached the lighthouse at Fanard Head.

By 9.00am, then, we were pretty much arrived and settled; idly drinking coffee and looking out on a very turbulent and spectacular Atlantic. The rest of the morning was mainly spent with Emma dozing and me scoping out to sea.

It was a productive time for us both. By lunchtime she looked and felt much better and I'd seen diving gannets, fulmar, guillemots, great northern diver and Manx shearwater improbably skimming the raging waves.

Post-lunch we had a steady pootle around some of the headland's 'roads' (some of which are so un-road like they dont even make it on to Garmin's mapping software) and ended up, by very early afternoon, at the coordinates shown: a cracking spot overlooking a relatively sheltered bay that's home to a large grey seal population. It's also known for birds and we've seen sanderling, ringed plover, light-bellied brent geese and (maybe) a pair of roseate terns. (Only 90℅ sure.)

I also managed an hour on the bike and during the ride saw a common lizard - my first Irish reptile.

Altogether a necessarily lazy but productive day - not least because Emma needed to be able to rest and rebuild.