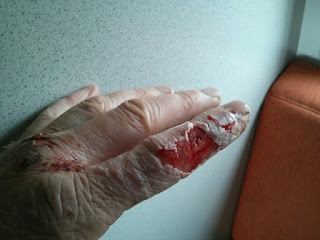 Last night's  enforced overnighting spot happened to be a good one. It was very quiet with only the crashing Atlantic for company. Neither of us slept very well, Emma with her runny nose, sneezing and coughing, and me with my crash I injuries.

This morning we changed some of my dressings, all seems clean enough but I'm a bit concerned about my left index finger. I may get it looked at.

We've mainly covered ground today having had a couple of very low-mileage-and-plenty-of-relaxation days. We again took quieter roads though and encountered some very spectacular scenery.

Settle in for a tale of sheer chance.

Driving out of Sligo we saw a tourist information sign. There was nothing special about it, it simply announced a random headland and I took a quick decision to follow it with a view to a tea break and a gaze out over the sea.

We arrived at said headland to find a few scattered houses, a rental property or two, and a bit of a cafe-bar. After a bit of shuffling to get parked up we were approached by a very polite chap who said he'd seen us drive past his window. He'd recognised the truck from a Facebook group and was a truck-builder himself. Duly announced, it turned out we'd previously communicated online. We were as shocked as each other.

We spent a short while talking trucks and then he directed us to our current location, a cracking overnighting spot right on the beach. Thanks GB: and good luck with the project.

Not many new birds today but I have spotted stonechats, linnets, razorbills (out to sea), and it seems swallows have suddenly descended. They've been a feature of the entire drive and are currently busy feeding on the pastures that adjoin our overnighting spot.

A tale of Irish oddity: we passed a tourist 'Scenic Route' sign yesterday and the road it pointed down did indeed look enticing. We could see it passed pretty loughs, woodland and open moor.

We fancied it so took it. The road was narrow and challenging, and confusingly the sat-nav consistently refused to recalculate a new route to our destination but instead kept insisting on a U turn. This went on for a long time and only when the road petered out to... well, peat, did it become clear that scenic routes in Ireland don't necessarily have to be through routes.