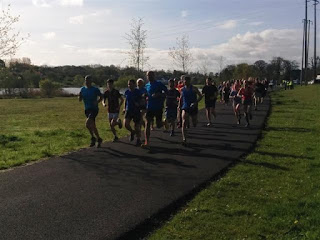 http://maps.google.com/maps?q=loc:54.23042%2C-10.06333
First order of business today was a parkrun. This has become something of a theme with our breaks and is entirely down to Emma. Unfortunately, because of her cold, she just wasn't up to running. In spite of it, she was still keen that the tradition should continue so at 9.30am I found myself on the start line of the Ballina event. Spot the impromptu finger bandage.
Though I struggled a bit, it was a fantastic run through woodland at the side of the River Moy. The sun shone and the birds were singing, altogether well worth making all my injuries ooze.
Speaking of, we took advantage of being in a large town and sought out a pharmacy. The pharmacist said all my scrapes seemed clean enough but advised on some hydrocolloid dressings for a couple of them. I paid with my phone using Android Pay: she thought I was a Sorceror.
The whippet proved popular in the town. We lost count of the number of people who talked to him, then us (always that order), or stared for far too long at him out of passing cars. Odd.
The afternoon saw us arriving at Annagh Marshes right on the very west of the west coast, an area managed for breeding waders and corncrake. I've yet to see or hear corncrake in the UK / Ireland so spent a couple of hours scoping and generally hanging around. No corncrakes though.
A spit from the reserve we found tonight's overnighting spot (coordinates). It's as good as they come.
Sent from my Nexus 4
Posted on: Sunday, April 16, 2017