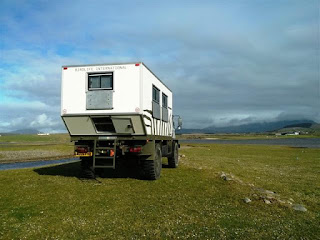 We had a lazy breakfast and then headed off to the Wild Nephin, one of the last remaining true wilderness areas in the country. To get into it properly you have to park and walk - for hours or even days. Though neither of these were an option for us, we did get a sense of the vast and untrammelled lands beyond the aforested areas. The road in and out was very tricky and included a bridge that we literally only just squeezed over.

After a couple of hours mooching the area we headed off south and just through the busy and attractive town of Westport came upon a VW T4 camper that was really struggling up a very steep hill out of the town centre. In fact, we witnessed it's demise. Great plumes of foul-smelling clutch smoke came billowing from the transmission and the van ground to a halt half way up the hill, right on the middle of the road, and on a blind bend.

The occupants were two ladies who we later found out had visited Westport on a day out from their home town of Galway. We couldn't see them stuck in such a dangerous position so stropped them up and pulled the van to the top of the hill to a flat, quiet area where they could at least let the clutch cool down and maybe later carefully limp the van home. Pleasantries exchanged,  we wished them well and went on our way. We genuinely hope the van got them home.

From there we pottered generally coastwards again and chanced upon a cracking surfing beach where dozens of surfer dudes (and dudesses) were taking advantage of brisk onshore winds. From the beach, in the distance, I also spotted some kite surfers doing their (very spectacular) thing on what turned out to be Lough Roonah. As well as the kite surfers on the lough, I could  see lots of gulls.

And so we went there (coordinates and pic), and what a place. It's very good for birds and I had an awesome sighting of two Iceland gulls amongst the many UK native species. The lough isn't bad for waders and wildfowl either.

It must be one of the shallowest loughs I'm the country. While the kite surfers were doing their thing a collie dog was having tons of fun chasing after them and no matter where it ran In the lough it was never more than a few inches deep. It was the oddest sight, on Easter Sunday of all days, watching a dog hundreds of metres off shore walking on water.