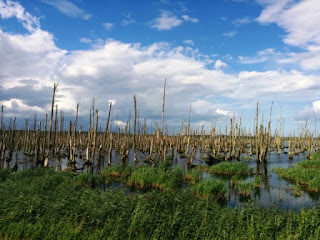 We made it to the northeast coastline as planned and though the scenery was pretty, it turned out the area is very heavily touristed and highly controlled in terms of parking and general freedom of movement. I get this given the natural history interest coupled with tourism pressure but it doesn't make for a pleasant visitor experience.

We had a potter about, though, and spotted red kites and lots of red-backed shrikes. The habitats are pretty unusual for Germany: old oak / birch woodland on sandy soils. Heath-like for the most part.

After the coastline we headed roughly south and have ended up at the coordinates shown, an altogether less suffocated area called Usedom Island, which with as least as much interest. Near to our coordinates there's a spectacular stand of flooded and almost petrified forest, a bizarre ancient steel structure abandoned mid-estuary that looks like half oil rig and half lift bridge*, and lots of old and interesting churches, lighthouses and farm buildings. As an extra bonus there's stacks of birdlife. Best sighting have been cranes, white storks, and a pair of Egyptian geese amongst literally thousands of greylags.

In other news, we've encountered a good few flash thunderstorms and are having a tough time with mosquitoes.