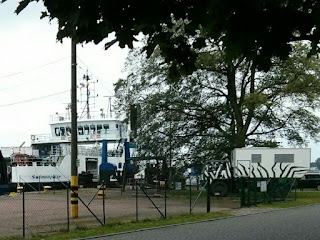 We crossed into Poland well before 8.00am in order to try to find - and get parked up for - the Świnoujście parkrun.

Świnoujście proved something of an unexpected sprawl with lots of tight streets, one way systems, and even at the time we arrived, bustles of people.

It was a culture shock too, the contrast to Germany was stark. One of the first sights we saw was an unkempt oldish guy sitting on a bench slugging on a can of something strong-looking. In spite of the very obvious difference in affluence though, we found the place very nicely kept and even saw loads of early-morning litter-pickers and people tending flower beds and such like.

We wondered openly why career-benefit-claimants in the UK aren't required to perform such similar community service in order to continue to receive free money. Maybe faced with being denied the 'right' to watch Jeremy Kyle on a 50" plasma at the public expense, and instead being required to actually contribute to societal good by clearing up other people's mess, our home-grown career 'job seekers' might even really try to seek a job.

There, I feel a bit better.

After a couple of fails we managed to find an adequate place to abandon the truck and set off into the labyrinthine woods to find the start of the parkrun. We felt a bit bad about dumping it somewhat unceremoniously; but convinced ourselves that hiding it very badly in a tree was a foolproof plan (pic).

The whole thing was pretty disorientating having only just crossed the border and all that, but things quickly fell into place by following others jogging towards the start. Once at the start the organiser recognised us as 'foreigners' and in broken English gave us a very warm welcome. She was very pleased to have UK visitors and knew of Yorkshire.

The briefing was chaos and seemed to be more of a competition to see who could babble the loudest. We couldn't hear one single thing the megaphone-using organiser was saying and without anything that even appeared like a warning, we were very suddenly underway.

The course was based entirely in Świnoujście park and was pretty twisty with lots of slippery single-track sections. It was brilliantly organised though, with cheery marshals at every junction. In spite of it being quite slow and tough, we both really enjoyed it.

A full-on start to Poland!