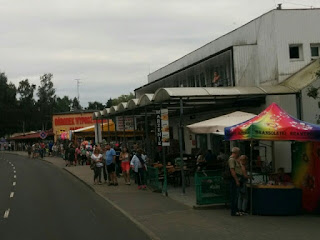 Świnoujście was not so easy to escape. It sits on the German side of a huge river delta that takes an awful long time to drive around: something that Świnoujście residents need to do should they wish to access the rest of Poland. And so, the public bodies in charge put on a constant flow of four separate ferry boats that connect Świnoujście to the 'mainland' for free. This is a good thing. The bad thing is that queueing to catch one can take - we were told - as long as three hours on a Saturday morning in summer. Luckily we were on and sailing after only about an hour.

Once over we took a bit of time to acclimatise properly over a lazy lunch. Initial impressions were good with the landscape looking a lot like Hungary. No bad thing as Hungary is probably our favourite mainland European country. Non-intensive arable farming was obvious with lots of cut meadows already re-flowering and teeming in butterflies and grasshoppers.

After lunch we fuelled up at the cost of about 89 pence a litre and started the potter eastwards. We hugged the coast and though we didn't get many good sea views the resorts were entertaining. These were so numerous they often flowed into one another to create endless miles of hoards of people in full-on holiday mode. We've never seen so many candy floss stalls, water slides, bouncy castles, bizarre pedal-powered contraptions and general brightly coloured tat retailers since the heydays of 1970s Blackpool and Butlins. Everyone seemed to be having a good time though!

At the coordinates shown now. A quiet if unspectacular track where roe deer and brown hare are almost constant companions.