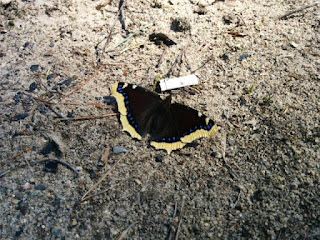 We made out way east today using mainly primary roads (ie not motorways) and were amazed at how busy they were. Even before 9.00am the traffic was relentless. The entire day has needed massive concentration as not only are the roads utterly and totally rammed, but also often very narrow and - in many places - bumpy and potholed. Though we've done our best to make progress we've bore witness to many incredibly dodgy overtakes.

In spite of the full-on driving experience, we've managed a couple of decent stop-offs and at lunchtime particularly came across some 'abandoned' land to the side of a track that supported unfeasible amounts of insect life, including a first for me: scarce copper butterflies. Camberwell beauties were abundant (pic), as well as a couple of species of blues and the more usual suspects. As can be seen from the pic, Polish Camberwell beauties seem partial to discarded fag ends.

The day grew incredibly hot and though it was tempting to get a bit of swim training in at one of the two lakes we saw that appeared to allow public swimming, the 'beaches' and swim areas were literally standing room only. We concluded that the entire population of Poland was either driving to or from, or actually at, one of these two venues.

By the time we started looking for a camp we were frazzled in 30+ degree heat. Rather than drive into oblivion (it never ends well), we parked up and Emma went out on the bike to try to find a good spot. She did, too (coordinates). A clearing in a mixed forest with a superb cicada chorus. Plenty of birds around, too. Best sighting was a merlin.