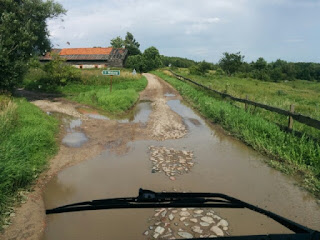 As we started to drive away from last night's camp a hornet (or other ridiculously huge wasp of about 40mm in length) appeared from its overnight roost in the cab and landed on Emma's leg. Emma's reaction to potentially bitey or stingy insects of any type is legendary: her reaction to unfeasibly large ones is something to behold.

The ensuing thrashing of limbs, hysterical expletives and display of an altogether primeavel survival instinct left me both bemused and fearing for my own safety at the hands of her inner Tasmanian Devil.

Stopping the truck, opening the door and letting the poor creature out solved the immediate issue but the 'debrief', which mainly involved a difference of opinion regarding my culpability for this near-disaster took a little longer to reconcile.

Lunchtime brought another splendid butterfly experience with clouds of them visiting a similar 'wasteland' wildflower habitat to yesterday's. Highlights were burnet moths, which I haven't personally seen for years and another new-to-me species: map butterfly.

The afternoon's drive brought more idiotic overtakes with one in particular nearly causing us to collide.  Multiple drivers simultaneously overtake lines of slower moving traffic and then, when faced with the inevitable oncoming vehicles, try to force their way back in to the line of vehicles they were attempting to overtake. One such idiot swerved in front of us so violently in order to avoid a head-on collision that I had to swerve and lock a wheel to avoid smashing them clean off the road. There must be countless fatalities here with this lunacy.

This happened less than an hour after we'd witnessed an air ambulance taking a truck driver from the scene of an incident. A four-axle tanker had gone off the side of the road, on to its side, and had slid into a bridge pillar, completely crushing the cab.

As well as the mad roads, we've also been on a good number of bad roads today (pic). The transition from smooth tarmac to sand / mud / pavé can, and does, happen with no warning. The bad roads are much safer but progress is in the order of  around 15-20mph.

The truck shrugs the bad roads off easily and the larger tyres really smooth things out. Also working well, as an aside, are the cheap cab fans I recently fitted. These have made the 30+ temperatures much more bearable. £13.99 well spent.

We're right in the northeast of Poland now (coordinates) and are amongst signs for wolves and husky-sleds.  It must get cold here but that's at odds with a couple of reptile sightings around and about: a common lizard and a grass snake. We also under attack from winged insects of all descriptions and it's very much a flyscreens-up type of stopover. On the plus side the insects hunting us are bringing bats hunting them right close to the truck.