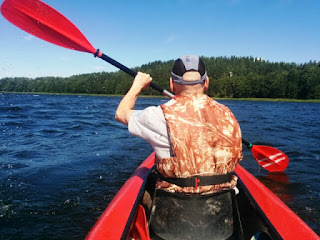 As planned, I had an early morning training swim in the lake next to the camp. It was pretty choppy and just occasionally I found myself fighting the open-water-swimming demons... Elation and panic are close bedfellows.

After breaking camp we drove through some very unspoiled countryside and some very traditional wooden-built-house dominated villages. It was great to see small fields of cereal crops with - horror of horrors - vegetation other than the cereal being grown actually present in the same field. Wildlife - 1; multi-national biocide marketing teams - 0.

By late morning we'd made it to a village known for its lakeside tourist facilities and decided to hire a kayak and have a potter out over the local lake.

For €3.00 we had a good quality two-man open kayak for an hour and had a hoot. The lake was pretty rough due a brisk wind and though the boat was stable we had our fair share of crashing through troughs and breakers, we got absolutely soaked.

Not long after leaving the village we found a really quiet spot for lunch and decided to call it a day. We caught up on a few chores and apart from Emma going out for a bike-train session we basically lazed about reading and generally taking in the surroundings.

We also gave the new electrical installation a good workout as Emma needed to use her (1200 watt) hairdryer. Normally, even with the engine running, this has historically knocked the stuffing out of the leisure batteries. Hairdryer usage, coupled with the short day's drive and compressor fridge on a lot of the time coping with the high 20's temperatures, would have seen our old batteries on their knees.

The 'new' batteries and tweaks I made to stop unnecessary residual losses seem to have made a massive difference. About an hour after the hairdryer use (and luckily whilst the fridge had cycled off) the voltage read 25.7V (12.85V per battery).

Not a very reliable test but encouraging for sure.