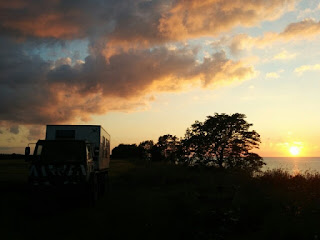 After Narva castle we started to head due west for the first time in over two weeks and made it to what is supposed to be one of the prettiest coastlines in the country at Ontika.

20 kilometres or so of limestone cliffs are the draw, with the highest waterfall in Estonia (30m) tumbling off them.

To be honest, the cliffs and waterfall were underwhelming. The waterfall's viewing platform was totally neglected and the whole area was heavily littered and altogether down at heel. It also sported the increasingly-present-at-attractions drone contingent. It's just great to turn up at sites of natural history interest and be subject to the incessant whirring and a voyeuristic violation of privacy. I'm gonna get me a catapult...

In spite of the slight disappointment, the wider area has thrown up a good overnighting spot (coordinates and pic) that gives an excellent sea view, but which also sports a huge array of farmland birds.

Highlight was a hobby appearing from nowhere and flying at huge speed into a loose flock of feeding house martins. The house martins immediately started alarm calling and quickly formed a very tight murmurating group. The hobby wasn't put off and flew straight at it and split an individual off. It then pursued the individual relentlessly with some incredible aerobatics including a fully-wings-folded high-speed dive.

The house martin was a fit and skillful flyer, though, and after several (very) near misses shook its pursuer off. The hobby then retreated. The whole house martin flock completely disappeared for about five minutes before reappearing and continuing to feed as if nothing had ever happened.

As an aside, whilst driving along the coast road we had the best view yet of a Montagu's harrier, quartering literally 25m from the truck. Unfortunately we were in fast traffic so couldn't stop.