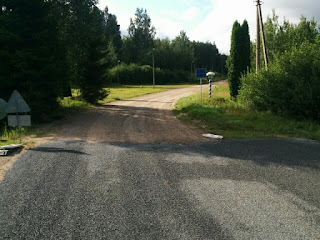 We crossed the border (pic) from the very civilised and westernised Estonia at about 9.00am and arrived in rural northeastern Latvia in about 1955. It really was like going back 60 or so years in time.

And we liked it.

There were hardly any dwellings and we drove until our lunch stop at about 1.00pm having counted only 16 other moving vehicles. In fairness, the last hour of the drive took us through some lovely countryside in the 'North Vidzeme Biosphere' and for that hour we were on no more than (vegetation-bashing) narrow forest tracks rather than conventional roads connecting places of civilisation.

Another feature that we'd consistently seen before in Latvia, but never in Estonia - and were now seeing again - was public bins overflowing with empty alcohol bottles and tins. Every bus-stop bin and every bin in every village seemed to be the same. Just guessing, but it seems public-space alcohol consumption is a big feature of life for a good proportion of Latvians. Rammed-full bins suggests they're tidy, though - even when sauced.

Back to the tale: the wildlife in the biosphere reserve to the east of Lake Burtnieks was brilliant. Best of (many) bird sightings were dozens of black kites and a turtle dove that ostentatiously posed on the track a few metres in front of us. This biosphere reserve really was a fantastic area and would definitely be another place we'd budget to spend far more time if we come back this way.

After lunch we headed for Cēsis, a town renowned for its ancient buildings and castle. Emma 'did' the castle and reports it was a good one with lots of archetypal dark passageways and genuinely evocative features. At €4 it was excellent value for money. The town of Cēsis was very well maintained with much civic pride evident.

Just to the north of the town, a short forest-drive away, is a place known as Eagle's Rock. A sandstone cliff on the meandering and pretty River Gauja. We had a quick look and, though it was busy with tourists, it was worth it.

After Cēsis we headed southwest. We want to get back to Lithuania to complete our 'must see' list and southwest is the direction we had to travel. Unfortunately this meant heading towards Riga and a very different Latvia. After Cēsis the roads and general feel of the country we've experienced so far changed dramatically. Gone were the deserted buildings, quiet unmade roads and 1950s tractors to be replaced by scenes more typical of Anywhereindevelopedeuropesville.

And so, getting close to teatime, we baled from the fast, tarmacked trunk roads and headed for the comfort of a deserted forest track (coordinates) to while away the evening. From our retreat we've heard lots of forest noises but seen very little. We did have the best sighting yet of a nutcracker, though.

Stop Press. Just as I was about to post this two of the 'forest noises' appeared and trotted over / along the track were parked on in the form of red fox and pine marten.