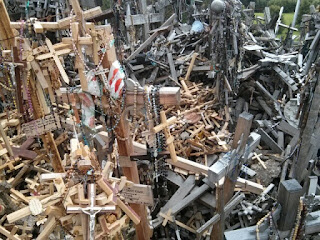 The satnav indicated that it would be best to go from our camp to the hill of crosses via Riga. The satnav sucks. Riga was a wretched snarl. I have no clue what people see in cities: especially capitals.

In confirmation: western Latvia is different to eastern Latvia. It's much more akin to westernised European countries and - to be brutal - a little euro-insipid. The drive from Riga to the hill of crosses was via a euro-route and was, frankly, tedious.

The Hill of Crosses, however, could never be described as insipid or tedious.

Essentially, over the years, the site has stood as a symbol of defiance against the repeated oppression of the Catholic faith. People have placed crosses here to show they wouldn't be cowed or forced to take on other belief-systems or atheism. It's been destroyed many times - most recently bulldozed in 1975 by the Russians - but keeps being re-instigated by the faithful.

The hill clearly holds some historic and spiritual significance but has, sadly, become a stark parody of itself. Though there many monuments with gravitas, there are also tens of thousands of broken plastic Jesuses lying around, as well as random pictures, rosaries and (literally) millions of small tourist-placed crosses made out of everything from stainless steel to the silver paper from a fag packet.

Throw in the odd beggar, lute player, and competing flautist banging out Amazing Grace on repeat and you might start to get the true picture.

Compounding the cynicism is the fact that amongst the tat at the visitor centre (complete with pay-per-wee toilets), visitors are encouraged to buy their own little wooden cross at €1 a pop and place it in their position of choice on the hill.

We overheard one North American lady confide in her friend that she 'didn't like the energy of the place' - and that about summed things up. The image shown in this post is not one that's easily found on the site's promotional material on the internet, but it does reflect the reality.

The site is an experience, for sure.

We left the 'Hill in Crisis' somewhat bewildered and made our way to the coordinates shown where we're going to sleep. Ironically, this area of the county was the last place in Europe to relinquish Paganism: the belief-system held good right into the 19th century.

Wooden totems depicting pagan idols abound and the area is all contained within the rather spectacular Žemaitijos national park. The national park is very attractive and supports lynx and elk, but the main reason we're here is to visit the Cold War Museum first thing in the morning.