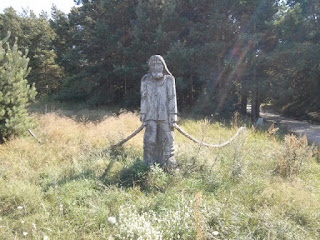 The Cold War Museum was brilliant. The presentation and interpretation were first class and, being the very first visitors of the day, we were able to spend as much time as we liked completely unmolested in the control centre and open-to-the-curious missile silo. The story of the building and guarding of the site is simply astonishing and the very real threat that the missiles housed here posed to the future of the planet was hammered home. This cold war war business was serious stuff indeed. Though the technology and workmanship around the site now appears dated, it's pretty clear it was cutting edge in its day. An awesome place.

After leaving the site we headed once again for Latvia and upon arrival made a brief but interesting visit to the 'ethnographic' museum at Pape. It's essentially an inhabited village of traditional wooden houses, extended community buildings and cultural-icon sundries (pic); each of which has a little information panel close by. Interesting for visitors but arguably a victim of its own success.

I wouldn't want me queueing up to read the board outside my house.

The dunescape around the area is impressive and the area seems busy with snakes. We just missed a grass snake of about 40cm slithering across the dirt road in front of us and a few kilometres later spotted a roadkill adder.

This was kind of the last stop we had time for in our roughly anti-clockwise loop of the Baltic States and after leaving Pape we covered ground to the coordinates shown, a forested coastal spot about half an hour short of the tomorrow's ferry terminal at Ventspils. It's a nice quiet spot that we had to bash through a bit of vegetation to reach. The only downside is that we seem to have excited a colony of flying ants. It's going to be a flyscreens-deployed kind of evening...