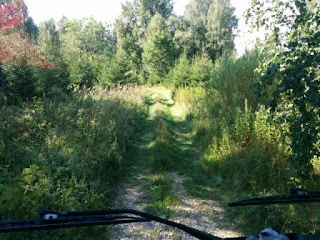 We got to Ventspils in plenty of time and joined the queue of cars and vans waiting to board the ferry.

It took ages for the single man at the gate to process each vehicle but we finally reached him. He glanced up and barked 'Boarding Pass'. We didn't have one. We had assumed that we'd hand our passports and booking confirmation to him, and, like just about every other ferry port in Europe and Scandinavia, he would issue the boarding passes to us.

A frenetic 15 minutes ensued with Emma running back and forth the the ferry terminal building: they wanted to see everything, including the truck's V5. Everyone was polite but took what seemed like ages to fill in about a million forms... and then transfer the contents to a computer.

Emma finally emerged triumphant with passes and cabin cards and we were able to proudly present the necessary pass to the single man at the gate. He seemed happy.

We were then ushered on to the ship where we began to make our way from the bowels to the passenger decks. Another queue! Ever passenger was being required to present their boarding pass (again) and have their details checked by the (single) receptionist.

It came our turn and all was well. We passed muster and were officially allowed to roam the ship. We wondered if the campsite bureaucracy we'd witnessed in Estonia was a one off... we're thinking now that it perhaps wasn't. Now, we're British; we enjoy a good queue, but queueing to be processed and then allowed to join even more queues is getting a bit hardcore.

In spite of it all, the ship set out 15 minutes early, we assume everyone who'd booked was aboard...

We're at sea now with about six hours of the journey left to do before Sweden.

The Baltic states were good to us with some good wildlife, cracking weather and a huge amount of cultural interest. The cultural side is never our main focus but it was hard not to be engaged. The ever-present legacy of recent Soviet domination is still clear for even casual observers. Estonia, and western Lithuania and Latvia have moved furthest from the communist influence, whilst eastern Lithuania - and especially Latvia - can still look pretty alien to UK eyes.

There are plenty of very sparcely populated and remote areas to be had and many of the roads remain unsealed; some have long washboard sections and can be pretty rough. There are also plenty of tracks to explore if you're that way out (we are (pic)).

Foreign tourists are not that common in rural areas (but we did see about 20 overland motorcyclists altogether). Tourist are to be found at the honeypots, though. We saw many nationalities including (in rough order of descending numbers) Russian, German, Finnish, Norwegian, Dutch, French, Polish, Austrian, Italian, Czech, Belgian and one Spanish. We saw one other GB camper van (VW T5) at the very top of Estonia.

Oddest tourists were an old couple two-up, Dumb-and-Dumber stylee, on a tiny Belgian registered moped in central Lithuania pootling at about 25mph in the bumpy gutter of a fast trunk road. We hoped they had a motorcaravan acting as the mothership close by, otherwise they were a very, very long way from home.

We encountered zero hostility from residents and - on the odd occasion locals 'found' our overnighting spots - they couldn't seem to care less.

I'd go back without much persuasion, we missed a great deal because of our limited time.