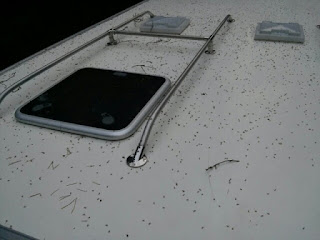 The ferry crossing was smooth and the enforced laze-about passed pretty quickly.

We're in Sweden now at the coordinates shown. It's a pleasant place with views over arable and forest land but the sudden comparative lack of bird and insect life is startling.

Hats off to the Swedes. At their border control they weren't routinely checking immigration status (most on board our boat were Lithuanian, Latvian, Norwegian or Swedish) or for customs violation - but they were breathalysing the driver of every single vehicle that came off.

We were one of the first off so whipped through the checkpoint pretty quickly but, having seen the number of people who had been drinking on the ship, I suspect some people were in for a long night on the quayside: maybe deservedly worse.

Whilst getting settled for the evening we spotted the odd vestigial flying ant recovering from last night's Latvian ant party held on our roof. We hoped they find good fortune in Sweden.