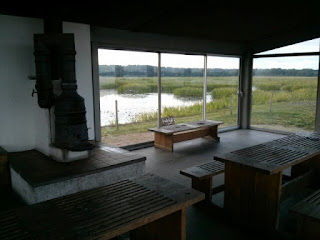 It rained persistently this morning, the first steady, miserable rain we've encountered on the whole trip.

By about lunchtime it cleared up though, and since then it's been sunny and warm. The temperatures are a bit down on those we had in the Baltics but that's something of a relief and no bad thing.

We're now at Örebro at the coordinates shown in preparation for the parkrun here tomorrow morning. This is only the second parkrun to be set up in the entire country and its not yet reached its first anniversary.

The area we're in is amazing. It's essentially a nature reserve comprising a couple of lakes and large wetland areas set on the doorstep of the city of Örebro. We're genuinely surprised how the two entities can seemingly sit side by side so well. The city is large and densely populated but the nature reserve still manages to be one of the best regarded birding spots in Sweden.

The reserve is huge and is crisscrossed with walking and cycle routes, it also has many well-tended facilities like barbecue pits complete with seasoned wood to burn, toilets, bins, seating areas, bird hides and there's even a 'glasshouse' sheltered observation area where people can take shelter, eat and look out in the event of poor weather. The glasshouse even contains a big wood-burning stove (pic).

Everything is incredibly well maintained, nothing is mindlessly damaged, and many, many people are in and around the area running, biking, birdwatching, having picnics and walking with their children.

In truck news, I changed a wheel today for the spare as something of a live experiment. The things that pass for recreation...