WELCOME TO OUR TRIP TRUCK BLOGSITE. WHEN WE'RE ON OUR OVERSEAS TRIPS WE AIM TO POST A FEW PICS, RELAY SOME EXPERIENCES AND TAKE AN OCCASIONAL WITHERING STAB AT TRYING TO MAKE SOME SENSE OF THE WORLD.

TRIP POSTS APPEAR IN DATE ORDER WITH THE MOST RECENT FIRST BUT OLDER POSTS CAN BE ACCESSED IN A NUMBER OF WAYS - SIMPLY FOLLOW THE RELEVANT LINKS.

AS WELL AS MEMORIALISING TRIPS, OUR SITE ALSO OFFERS BRIEF INTRODUCTIONS TO US, OUR TRUCK, MY HAYNES MANUAL AND A FEW RESOURCES. WE HOPE YOU ENJOY YOUR VISIT! 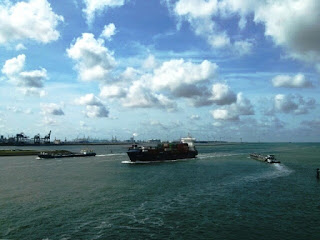 We arrived back at Hook of Holland at about 11.00am and had a last lazy couple of hours enjoying the Netherlands. It was great to simply park up near the shipping lanes and watch the huge number of ships and barges toing-and-froing (pic), as well as the birdlife of the area. It was also great just to be part of the relaxed atmosphere and civility. Nobody seemed rushed or stressed and the pace of life and general ambiance just made us feel good about simply sitting on the grass and being amongst the local litter-free, bicycle-riding, sitting around and quietly picnicking community. I'm sure there must be discord and unrest here but it doesn't spill over much. There's just not the ever-present sense of rush, impatience and intolerance that we've become so accustomed to in England.

Speaking of which, we eventually cleared Harwich at about 8.45pm after an utterly shambolic arrival / processing. The pedestrian gangway at Harwich was out of order so a special contingency was put into place and this delayed the start of vehicles being allowed off; also, the ship's crew had made a complete hash of loading at the Dutch end and somehow ended up with lanes of larger vehicles stuck behind a lowered car deck - this bottlenecked the whole disembarkation process horribly; then, a port employee separating vehicles into lanes to clear immigration who had absolutely zero spatial awareness or competence was waving taller / wider vehicles into passport control lanes that they just would not fit through. This led to drivers having to take their own initiative and zig-zagging all over the place downsteam of the halfwit and across all of the queues. This meant some passport control operatives were left literally twiddling their thumbs whilst others had a queue of 20 or more vehicles to process.

Once through the shambles we were smacked in the face with wretchedly overcrowded and potholed British roads, literally tons of litter, overgrown verges, aggressive drivers, damaged bus stops; yobbish drunks, the list goes on...

It's horrible to seem to be so negative and I really wish it wasn't this way. Living in England for decades and being minutely sensitive to our cultural cues it's admittedly difficult to be objective; but I defy anyone to hop on this same ferry and spend a couple of days touring around random parts of the Netherlands, then do the same here, and not to conclude that we're circling the plughole.

Ought we to run an errand by Dutch bicycle or Range Rover Evoque; and all that these ultimately represent?

At the coordinates shown now and heading 'home' tomorrow via the insuperable Stibbington Diner.