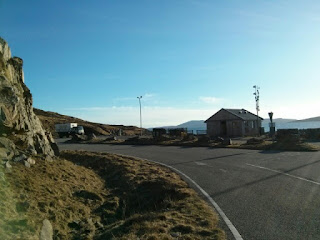 We spent a lazy first part of the day strolling on powder-white beaches and generally watching the world go by. It's been a beautifully clear and sunny day albeit crisp in the wind.

Best loafing-based sightings were a huge skein of geese making the most of the southwesterly and heading off for Iceland / Greenland, sanderlings, black-tailed godwit, and a small flock of pale-bellied Brent geese. We also had our first seal sighting of the trip with just one individual hauled out on some offshore rocks seemingly enjoying the sun.

After lunch I had a spin out on the bike and did a full circuit of the main road around Barra in just under an hour. This was slower than the distance suggests but there are some fearsome little hills and the beauty of the coastline is extremely distracting. The white beaches, coves, crashing surf and clear azure seas are very, very compelling.

We've spoken to / been waved at by good numbers of locals and this adds to the feel-good factor of the Island.

By mid afternoon we decided would be good to get a jump on things and try to catch an earlier ferry to the one booked over to Eriskay. Unfortunately the first was full so we had to ring CalMac to juggle times around. luckily there was space on the final crossing of the day so we booked it.

The wait was no chore. At the 'port' was a great setup consisting of plenty of parking space, a heated building housing toilets, vending machines, free WiFi and lots of information. Hats off to CalMac.

The 40 minute journey to Eriskay was smooth and on arrival it was good to see a similar building (this time also including a shower) and parking setup. As time had drawn on we decided to make most of the facilities and call it a day; so simply pulled on to a bit of rough ground at the 'port' at the coordinates shown (pic).

It's a glorious evening and I'm currently sea-watching hoping for, well, whatever really...