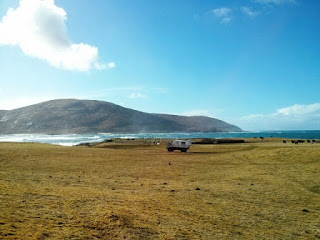 A much nicer day today with some long spells of sunshine only occasionally interrupted by hail.

A pair of red-breasted mergansers in full breeding plumage lazily hunted close to our overnighting spot as we broke camp. Good start.

We left Vatersay first thing and went back to Castlebay on Barra where Emma - in her usual apocalypse-prepper mode - raided the well-stocked Co-op. If I built a bigger truck, she would most definitely still (over) fill it.

First port of call was one of the formal Outer Hebrides Bird of Prey Trail sites on the west of Barra where we effortlessly bagged a white-tailed eagle. Nature on demand!

Close by we stumbled upon an old (unsigned) burial ground that hosted a good few Commonwealth war graves. It was in a stunning location on a headland and not that easy to access (pic). It was worth the hassle getting there, though; as well as the cultural and natural beauty interests, it gave up good numbers of barnacle geese and - even better - a large flock of long-tailed ducks nonchalantly surfing 8 foot white horses.

Afternoon saw us watching the spectacle of an aircraft taking off from the beach that forms Barra airport before viewing Cille Bharra, a tiny church on the site of a 12th century place of worship.

By mid afternoon we'd found a spot with fantastic open sea views (coordinates) so called it a day, went for a run, and then did some sea-watching. Best sightings were great northern divers.