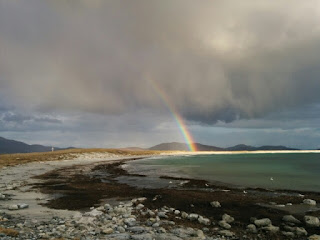 We saw twite first thing this morning, my first confirmed sighting ever. A pair of nesting stonechats also kept us company over breakfast.

Once underway, we soon saw that the people of Eriskay are clearly extremely proud of their tiny Island: all the properties were very well kept and there was no litter to be seen anywhere. This was in pretty stark contrast to Barra - more later!

We've knocked off quite a few touristy things today but it's been less than straightforward. Whilst researching things to do before we set off I used the official Visit Outer Hebrides website but for many of the sites it identified found little or no information, sometimes not even an image.

No matter, I thought, I'm sure there'll be the usual information boards and sanitised seating / tat-buying opportunities on the ground.

In chronological order, and with greater or lesser success, we visited:

1.The Polochar Stone - a standing stone of some significance at the southern tip of South Uist. Quite what the significance is is not terribly obvious. There were no signs identifying it's existence or information panels on the ground.

2. Reineabhal Chambered Cairn - impossible to reach without climbing barbed wire fences and squelching through peat bog. No signs or information panels - public access not even apparent on to the land.

3. The Kildonan Museum - closed today being Good Friday but the sanctity of the occasion did not prevent the museum café from opening so we supported the local economy with some Jesus-approved tea and cake. In fairness there were some interesting bits and bobs around the café area including some information about the last human inhabitants of St Kilda: a place that's always held some fascination for me.

4. Dun Mhulan Broch - some good information panels but no obvious  sign of any remnants of the broch itself. A neat flip on the other tourist experiences.

5. Ormiclate Castle - hmmm, this appears to be the remains of a fortified house in the grounds of a working farm with no means of public access. No signs or information panels.

6. An Carra Standing Stone - an impressive  standing stone but no obvious access and, again, no signs or information. It was clear others before us had stepped over the barbed wire fences and made their way to it so we did the same.

7. Loch Aineort - a spot known for otters. No otters sighted but loads of seals, stunning scenery and three eagles. There were some super walks, seating and picnic spots around this area, all it seems privately created by the land owner rather than any layer of government.

These experiences are what they are. I'm not being critical, just telling it how we found it on the ground.

Anyway, the coastline near the broch above is supposed to be good for otters and, set against genuine machair, it's just stunning so we returned and are going to kip here (coordinates and pic). The birdlife is awesome and just some of the species spotted have been: sanderling, dunlin, bar-tailed godwit, twite, great northern diver, eider, wigeon, tufted duck, goosander, shelduck, greylag, lapwing, redshank, several gull species, oystercatcher, pied wagtail, meadow pippet, turnstone and a good few more.