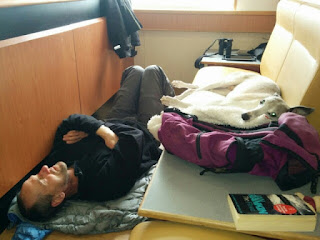 It's never a good sign when ferry operatives search your truck for lashing points.

The writing was on the wall when we got a text and then phone call from CalMac telling us the sailing had been brought forward by three hours because the Western Isles seas were about to be battered by an incoming Atlantic storm.

The crossing was bad; bad to the point that once we hit open water the CalMac crew even turned off their deep-fat frier and closed the restaurant. Restaurant staff were last seen on all fours retrieving pan lids and jacket potatoes rolling rebeliously around the galley floor.

I don't cope well with bad seas and had to lie down a lot (pic), think of boiled ham*, and try to anticipate and visualise the boat's movements. Emma, meanwhile - whilst constantly complaining of feeling seasick - happily munched on snacks and managed to read for hours on end and / or faff around on Facebook.

The world is devoid of natural justice.

The misery ended just over five hours after it had begun as we decanted from the battle-hardened ship onto a gloomy, freezing-cold, sideways-sheeting-rain Barra.

A very short drive south quickly saw us on to Vatersay, the southernmost inhabited major island of the Outer Hebrides, where we dove into a plausible looking overnighting spot (coordinates) and called it a day.

It's proper wild here at the moment with a super-strong westerly literally whipping breath away and freezing anyone daft enough to stand out in it for a minute or two to the bone.


Sent from my Nexus 4

*I have no clue why. I haven't eaten this since childhood, let alone pre-veggie days, but it helps to fight off nausea.
Posted on: Thursday, March 29, 2018