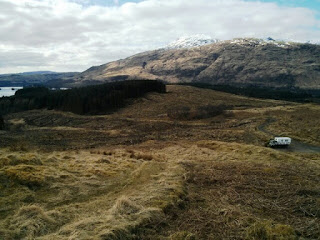 After the Kelpies we bumbled on towards Oban for tomorrow's ferry, enjoying the ever-more-impressive landscape as we went. There's still some serious snow on the tops.

We were initially heading for another overnighting spot we already know but decided to give a place I'd spotted as a likely candidate on the map earlier a whirl.

Good choice (coordinates). The views are awesome (pic), the nearby monument to Duncan Ban MacIntyre (a poet from the 18th century) is worth a look, and we're well off the beaten track. Overnighting in places where sat nav mapping software doesn't recognise as existing usually works out well.

Best sightings have been a barn owl and a male crossbill in full song (first time I've heard one singing).

I managed a run here and also spent some time chatting to a very accomodating local who'd just moved to the area four months ago and was living in a properly remote cottage dating back to the 1700s that he'd bought along with 42 acres of mixed-habitat land... for under £150,000. I think I may have stumbled upon a solution to the so-called first-time-buyer housing crisis.