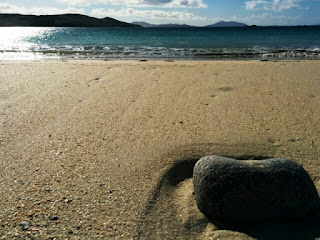 A potter round the cemetery near where we'd camped last night flushed a snipe from behind a grave stone. I honestly don't know who was most startled.

Thereafter, morning was all about catching the CalMac boat to Harris. The sailing took about an hour, was pretty smooth and resulted in more of the same bird sightings; plus black guillemot, razorbills and two pretty big groups of long-tailed duck.

While I think on, other birds we've seen but I don't think I've mentioned to this point have been fulmar, gannet, lapwing, redshank, ringed plover, rock dove, wheatear, hooded crow, raven (the last three are very common), buzzard, kestrel, cormorant, shag, curlew; plus the kind of birds commonly seen anywhere across England. We've also seen a tiny number of redwing, maybe breeders? Notable by absence are the normally ubiquitous magpies.

Harris feels quite different to the islands we've visited to this point. It feels a bit more like the rural Scottish mainland but it's early days so we'll see. So far we've done conventional tourist things like visit St Clement's church and drive up the east coast road. This is renowned for being rugged and pretty, and giving a taste of both mountain and coastline. It is indeed pretty but is quite narrow single-track  that requires healthy amounts of concentration in the truck.

At the coordinates shown now where we've run and biked and are going to kip.

Visible from a hilltop close by are the Shiant Islands (I knew of them thanks to Colin), where there's an ongoing program to eradicate the islands of black rats. These have done rather well thanks to predation on ground-nesting birds.

Now, the black rat is pretty much unknown in the UK and is thought to have populated the islands because at least one (more likely at least two) swam ashore following a shipwreck.

Unfortunately for this rare-to-the-UK species of mammal, it's deeply offended conservationists who would rather it didn't eat storm petrel and Manx shearwater eggs.

And so, as rare as it is, and unlike the rather more benign fate that met most of the hedgehogs translocated from the Outer Hebrides, it has been sentenced to death.

Sure, it's a non-native species, but then so is the hugely more destructive domestic cat.