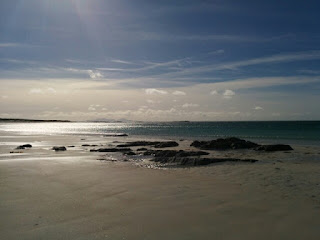 A steady drive to the west side of North Uist saw us back into machair - the grassland habitat that forms given the wind-throw of organic / inorganic matter from the seas and beaches, combined with the various climatic factors etc. It's pretty unique and a stark contrast to the upland moorland and blanket peat that tend to dominate the landscape.

On the drive over we stopped off at a point identified as good for seeing every species of bird of prey known to the island and though the birds were elusive, we did see another red deer stag casually grazing up on the hillside.

Set in hundreds of acres of machair and dune habitat is Balranald RSPB reserve and we spent a couple of hours just seeing what we could see there. It was teeming, with huge flocks of barnacle geese taking front stage centre.

Emma also managed a 3.5-mile run entirely on the beach here (pic) - and there was far more beach to be had if her legs had been up for it. In fairness, it was very windy and bitingly cold (in spite of constant sunshine), so 3.5 miles was pretty good going.

From the coast here are fantastic views to the islands of Boreray and St Kilda. Even though they're about 40 miles out to sea they were clearly visible and it was even possible to see some of the taller stacs surrounding them. We started to form a plan to look at the possibility of setting foot on St Kilda sometime future...

A few more otter spots and a broch (good information panel this time) made up the bulk of the afternoon. No otters.

Which brings us to the coordinates shown, our kipping spot for tonight. We're in machair again here and as well as the usual suspects have spotted a small group of snow buntings feeding - presumably getting ready for the push north.

We're also, purely by chance, very close to the (ruined) house of - and memorial to - Angus Macaskill, a perfectly ordinary man except for the fact he stood seven feet and nine inches tall!