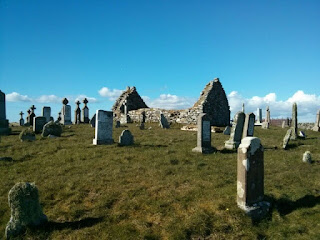 Today was mainly about searching for otters.

We went to a total of four spots that are meant to be known-good and spent ages scanning the intertidal areas.

No otters, but, we spotted some really good wildlife anyway.

Three red deer, very close up were a good start; they were laid up in heather and we'd have driven past without seeing them if the stag's antlers hadn't broken the skyline. A pair of golden eagles followed, quite distant but easily identified. They were soaring and diving together, presumably engaging in some bonding behaviour. Other stuff this morning included twite and whooper swans. All this was from the road around the the Loch Sgioport area.

After lunch we did a couple of touristy things including visiting Cladh Mhuire, a burial ground on Benbecula used since the 6th C and still in use today. It also hosts the ruins of the tiny St Mary's Chapel (pic) and is the site of yet more Commonwealth war graves. Victims a young as 18 from WW2 from as far afield as Australia and Canada are here, as well as the always-poignant 'Known unto God' graves.

We continue to be met with a great deal of friendliness. Many other drivers and people in the street of all ages wave at us. We've also spoken to a good number of Islanders now and all seem to be genuinely pleased tourists come here. One lady even went to a huge deal of trouble to retrieve some videos on her phone of corncrake in her garden. Corncrake, of course, would be a big tick (we've only ever heard them in eastern Europe) but we're about a month early for their arrival.

At the coordinates shown now near to Port Pheadair where were going to kip. The vista from here is spectacular and though we're again mainly trying for otters, the seal and birdlife is excellent. We've been watching seals playing and semi-breaching, and been lucky enough to spot a short-eared owl quartering in the late-evening sun.

In other news, the big blue skies and 'fresh' winds continue. It's warm in the sun but freezing cold if you can't shelter from the wind. In other, other news, we both ran today. Finding spectacular places to run and bike had been really easy so far, as has been finding top overnighting spots. Provisions are reasonably easy to buy - there are a few general stores and small supermarkets dotted about Oh, and it's not getting fully dark until almost 9.00pm.