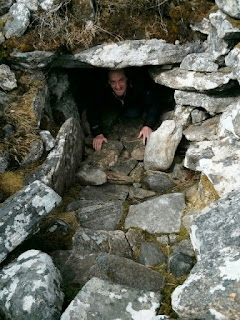 Morning was taken up by more otter searching, some bird of prey searching, and a trip to Barpa Langais chambered cairn.

No otters, lots of hen harriers, and a better-than-expected experience at the cairn was the net result.

The cairn is thought to be the oldest man-made structure in northern Europe, dating back about 5000 years. It was thought to be in use for a continuous 1000 years and, remarkably - given its anthropological importance - is left unguarded and free to be visited by anyone who fancies.

It would be hard to imagine it surviving without being trashed or filled with hypodermic needles and lager cans in most parts of the UK.

Lunch saw us at harbour side at Lochmaddy where we were approached by a chap who'd just landed a boat. He'd come to tell us of the location of three golden eagles he'd seen just offshore and couldn't have been more welcoming. He invited us to stay on his land if we wished and also gave us a location that might be good for otters. We thanked him for his kindness and made our way to the otter-ground where we're going to kip (coordinates).

No otters, but the spot did produce our first  red-throated diver of the trip and proved a good base for a spin out on the bike. We also spoke to a couple of locals who've given us yet another otter-lead...