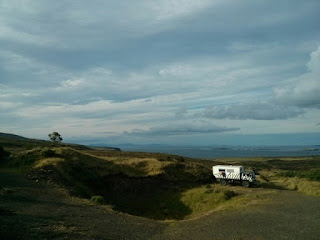 After Neist Point we spent more time looking for otters at some suitable habitat but again drew a blank.

Otterless, we headed for the jetty where were to meet the boat first thing in the morning. The boat was in and the owner working on one of its engines. Hmmmm.

Long story short, because of angry winds and swell, he hasn't been able to take trips out for the past few days and though tomorrow seems on, conditions mean he can't then next got to St Kilda until a week today.

Fingers crossed that we can at least get there for the day.

Disappointed, we headed off up a nearby track to the coordinates shown (pic) where we both had a run and, afterwards, Emma started unpacking all her fastidiously packed (read crammed-in-a-rucksack) camping stuff to create a daysack instead.

I'm still in denial and will frantically sort myself in the morning...