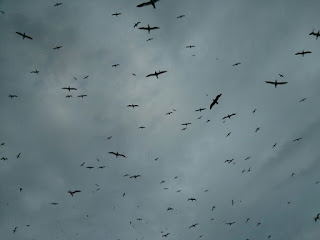 A very early start saw us down at Stein jetty and witnessing the St Kilda boat ominously still out of the water. A full team were working on it. They'd been there till 2.00am and had started again at five.

In spite of their stress, they patiently confirmed that the boat would be ready almost on time and that upcoming sea conditions meant that today's sailing would be the last time they could put to sea until at least next Friday or Saturday.

A couple of older chaps who were fellow two-day campers made the choice to carry on with their plan to camp in the hope they could ration out their few day's worth of food for a week. We just didn't have the luxury of considering even that conundrum so accepted that - for us - a day trip it was going to have to be.

What a day, though. Sea conditions were as good as they get west of the main mass of the Outer Hebrides and the weather stayed fair. Three and a half hours at 25mph saw us arrive at the St Kilda archipelago (coordinates) by about 11.00am and we were treated to non-mist-covered islands and stacs (not common), plus a sea calm enough to allow the boat to get right up to the sheer sides of the genuinely monolithic, intimidating hulks. The remoteness and dominance is simply humbling.

Just everything about the stacs and islands defies superlatives. From sea colour to geological formations and the almost surreal number of birds is just plain overwhelming (spot the skuas amongst the gannets in the pic).

Hirta itself (the only consistently inhabited island of the St Kilda archipeligo that was finally abandoned in 1930), though in itself awesome, is inarguably somewhat spoiled by MoD constructions that support the missile tracking system on Uist.

Not that the island itself or its non-human occupants seem to mind much.

The old abandoned houses and cleits (stone structured used to dry seabirds before consumption) on Hirta were stark reminders of a stark existence, the sheer difficulty of human existence in any form that we can relate to is just staggering. Just staying alive here must have been so hard.

In the four hours we had on Hirta we shed a lot of calories but managed to get to the top of the two highest peaks and also (hurriedly) visited most of the 'must see' features.

Birdlife was great with the highlight - for me at least - of being attacked by numerous  great skuas as we passed through various individuals' territory. They really are tough and scary. A birdy bonus came in also spotting a few Arctic skuas - quite rare on the islands, apparently.

The boat trip back threw up some fantastic bonuses. We managed to get within a few feet of a group of common dolphins, saw a minke whale up close, and (in no small part due to sheer persistence of scanning open water in the freezing cold conditions on the exposed rear of the boat) saw about half a dozen storm petrels approximately half way between the Outer Hebrides and Skye.

I couldn't tell the exact species but given their powerful flight would call Leach's. Storm petrels of any species have eluded me to this point so this sighting was a major plus. I had intended to scan the sea off Hirta in the hope of spotting them coming in to roost at twighlight and the disappointment of being denied this opportunity was almost completely offset by spotting these few individuals out at sea.

St Kilda deserves all the hype that surround it and the whole day was just an awesome and contemplative experience.