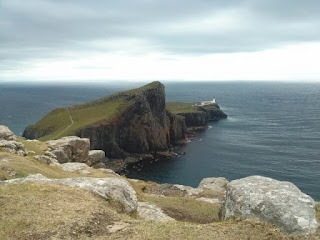 Last night's camp was a cracker.

After leaving we headed north for Neist Point, a place my brother recommended and from which he effortlessly watched whales a few years ago.

The journey across Skye was unspectacular and reinforced my initial impressions of the island being very touristy. Hotels, coffee shops, crafty stuff and all other manner of tourist traps exist in proliferation.

And the visitors are truly international. Seriously, the number of Dutch, Belgian, French, German, Austrian, Swiss, French and Spanish registered vehicles is staggering. Add to this that there are loads of hire vehicles here, too and it's altogether obvious that we're in a very lucrative honey pot.

The single-track to Neist Point was a revelation and demonstrated that nationality is no indicator of driving competence. Drivers from all nations made heavy going of the relatively simple task of using passing places appropriately and - seemingly by the dozen - rammed their vehicles into ditches, fences, each other, and other general infrastructure.

At one point, an American woman in a hire car was so befuddled by a simple requirement to reverse she rammed the car into a ditch and brought the whole road to an entire stop.

I had to extract it, reverse some way, and create just enough room to free up the ever-growing backlog. The number of gormless faces peering through windscreens was staggering.

Anyway, we eventually reached Neist Point (coordinates and pic) and a patient hour or so spent in the ripping wind was rewarded with brilliant sightings of breaching / hunting dolphins and one minke whale. All of these were well offshore in the tract between Skye and North Uist but the sightings were solid.

Just for the record, every time we passed a French-registered vehicle we spat at it, threw urine at it, and booed the driver / passenger. It seems this is the new expectation of the Entente Cordiale as determined by our French brothers' treatment of Chris Froome in this year's Tour de France and we didn't want to disappoint them by appearing to be ignorant of their cultural norms.