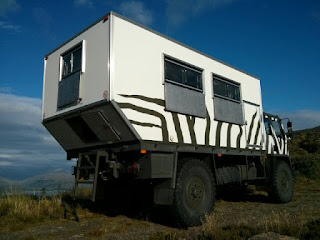 After the full-on St Kilda day yesterday we spent today bumbling between bays and inlets on both the east and west of Skye in an all-out otter-quest.

We saw plenty of good wildlife, including a golden eagle, but still no wretched otters. As a sightings-aside, we also saw a very nice MAN-based, Belgian-registered real-deal overland camper. We exchanged enthusiastic waves and thumbs up - as is made compulsory by the internationally recognised strangers-passing-in-similar-vehicles etiquette.

We had more helpless-tourists-stuck-in-cars experiences today and I had to get hands-on to help a couple of Germans on a heavily laden touring motorcycle get turned on an improbable gradient after they'd come to a complete impasse with a Spanish family in a motorcaravan that already had a smashed off apron and light cluster. It looked like the señor driving had had a few manoeuvrability issues to this point and didn't fancy any more.

Speaking of improbable gradients we also came embarrassingly unstuck ourselves. We'd just done a very long 1:5 or so descent and when getting back on the throttle to go up the next hill the truck just plain and simply very gently cut out and - commendably serenely - rolled to a single-track-road-blocking halt.

I quickly sussed that the gradient had meant the fuel in our running tank had pooled forward and not been available at the (rear) take-off point; so we'd filled the entire fuel injection system with air.

Tools assembled, cab tilted, wife on cranking duty, I worked as fast as possible to bleed the system as far as the lift pump. That done and fingers crossed we gave it a go... nothing.

Ah well, cracking the injectors it had to be, then. And so it came to pass. After methodically bleeding four, it spluttered back into life.

We held up one motorhome and one car but from start to finish had it sorted within 10 minutes. On the downside I'll stink of diesel for days.

Shortly after, we baled to the coordinates shown (pic) to reflect on the low-fuel-in-very-steep-terrain mistake; but also mainly to drink beer.