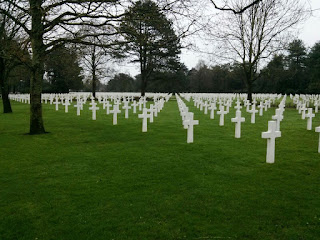 Last night's camp was more our usual thing - zero traffic and loads of eerie owl and (I think) buzzard calls throughout the night.

We'd intended to spend an hour or so at the American War Cemetery at Omaha Beach post breakfast (consisting of paracetamol and cereal bars in approximately equal measures) but ended up spending almost all morning there.

The visitor centre, cemetery and grounds provide for a deeply moving experience but more than anything it's the obvious attitude of the USA towards its WWII war-dead that was the most impressive thing. The visitor centre, staff and grounds are clearly funded on a money-no-object basis. Everything from the architecture to the monuments to the carefully managed topiary is just outstanding. There's no sense of the expected brashness and arrogance so often demonstrated by the US but instead a dignified, sombre, and seemingly genuinely held gravitas.

The whole experience was unexpected and humbling: the number of graves (the pic shows a mere fraction) and the clearly genuinely held contemporary regard for the people that died here moving. The USA really hasn't forgotten.

This afternoon we visited a cemetery created for the German war-dead and though it's well maintained the difference between it and the American cemetery at Omaha is stark. Graves were marked with a simple plinth and soldiers buried two per grave.

I could bang on about evil, indoctrination and pointless destruction but frankly, what's the point.

After the German cemetery we stopped for essentials comprising diesel, a baguette and some 15W40. The leak isn't any worse and in spite of the mess the actual oil loss is minimal.

Happily, Emma is not so I'll today, either. She's now constantly moaning about feeling poorly and ostentatiously groaning a lot rather than just lying down, being very quiet and looking grey. This is a sure sign she's through the worst.

By mid afternoon we were heading for Utah Beach when I spotted a road on the mapping software leading through a wetland that just smacked of our kind of place.

We dutifully gave it a go and the result is the location shown where we intend to kip. It's a superb wetland area that's actually designated as an important bird reserve - something that's not as commonly found in France as in England. It's a vast area of polder with countless thousands of waders, wildfowl, geese plus other wetland specialists like harriers etc. Best sightings have been huge flocks of barnacle geese, whimbrel, spoonbills and a couple of nonchalant coypu. These, unfortunately, are regarded as a pest in most European countries and, truth be told, probably regret the day they agreed to come over here from South America to be exploited for their pelts.

Speaking of mammals, there were red-squirrels-a-plenty in the Omaha Beach cemetery. Ironic given the destruction caused to their population by invasive greys brought over from the USA.