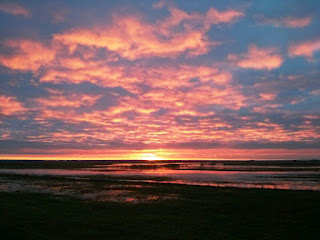 http://maps.google.com/maps?q=loc:49.72556%2C-01.94160
Last night's camp was another cracker. Fantastically peaceful with only the sound of unsleeping geese and wildfowl to accompany us. Sunrise was spectacular and the pic simply doesn't do it justice.
The reserve really is amazing and a couple of hours spent walking about this morning resulted in a full visual on a Cetti's warbler, coypu so close I could literally hear them munching, roe deer, and literally thousands of waders, wildfowl and geese. Notables included pintails, ruff and spoonbills.

We also encountered a few spectacular raptor sightings. We saw peregrines tearing through the reserve scattering everything in their wake, an airborne kestrel / buzzard duel and corvids pirating a marsh harrier's prey. There wasn't much Christmas spirit evident; in spite of the entire area being festooned in natural mistletoe.

After leaving, we bumbled only a few km north and had lunch near the D-Day Utah Beach musuem. The museum itself was closed but there are loads of real-life exhibits and memorials along this stretch of coastline. Some casual sea-watching from here pleasingly threw up a good number of dolphin sightings and diving gannets making the most of the dolphins' corralling efforts.
I managed a run from here while Emma continued to relax and recuperate. Thankfully she's improving all the time so we've decided to carry on bumbling - albeit in a much-curtailed fashion; staying close to French ferry ports just in case the truck's oil leak worsens dramatically.
From the extended lunch stop we headed up the Cherbourg peninsula to the coordinates shown (kipping here). It was all a bit of a random decision to head here but it appealed to me to look out across the sea to Alderney from where - only a few short months ago - I'd looked out across the sea to the Cherbourg peninsula. Alderney looks well and I can even make out some of the landmarks I visited on the push bike.
The coastline where we are is very different to that of the east of the peninsula, it's much more rugged and windswept. Birds aren't as prevalent but in a casual hour on the foreshore I saw redshank, little grebe*, turnstones, ringed plover, dunlin, little egret, grey heron, cormorant, numerous gull species, stonechat and meadow pipit.
Altogether a grand Christmas day.

Sent from my Nexus 4
*[Edited post trip] I was never quite happy with this ID as the grebes struck me as being slightly unusual but they were distant, the light was bad and I didn't have my good optics with me. Later research revealed they were almost certainly Slavonian grebes.
Posted on: Wednesday, December 26, 2018