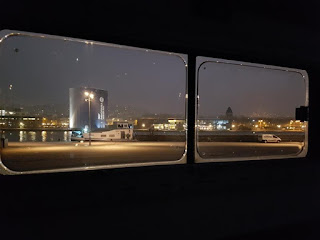 Foggy today. All the way from last night's camp to our lunch stop on a forest south of Rouen. This forest is reported to support wild boar but all we saw were chaffinches and a great spotted woodpecker. It was a difficult drive to the forest, too. As well as having to make a few diversions to avoid the now zillions of 3.5t restriction signs festooning France, the authorities have also started a new trend for prohibiting vehicles over 2 / 2.5m in height in some small villages. We're happy to comply, of course, but it can make for a frustrating drive.

As already reported ad-nauseum, our health and the truck's oil leak have meant the inevitability of trip curtailment and we've now booked a boat back to England for tomorrow evening. It means missing all of the WWI Western Front sites I'd originally planned to visit but hey ho. It's as good a reason as any to arrange a return trip to France.

We're at the coordinates shown now with a view to Emma being able to tick off the Rouen parkrun tomorrow. She's not on top form by any means but will be OK to get round.

Being here means we're in a quite unusual overnighting position for us. We rarely stay in urban areas but do occasionally take a perverse pleasure in trying to find interesting and 'quiet' camps in towns and cities once in a while. We call such sites 'urban melts' where the idea is that we try to blend into surroundings to the point of chameleon-like invisibility.

And so, for now anyway, we're down amongst the bargees on the River Seine (pic) and tucked tight up to some portacabins. The area's an odd mix of urban decay, heavy industry, shiny Riverside restaurants and a working river.

It could turn out OK, or could equally be horrible and prompt a nocturnal shuffle. I guess time will tell...