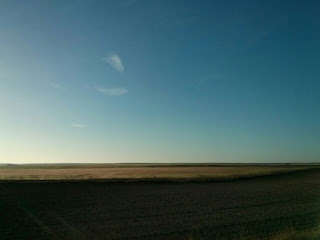 Well, we saw no mammals at the overnighting spot but it was more than made up for with the sheer spendor of the views, dark skies, utter silence, and the simple pleasure of being awoken at dawn by the hauntingly melodious song of several golden oriole around the truck.

In spite of being under some time pressure to get back to Santander we lingered in the park until lunchtime. It was worth it, even Emma was totally and utterly immersed and I could probably even have dispensed with today's clandestinely-administered Ritalin meds.

Before we left, we saw one of Europe's rarest birds, the black vulture, and also a newly-arrived-on-migration Egyptian vulture. It's just a fantastic park. Moreover, the wider region of Extremadura definitely lives up to its reputation for natural-history interest. The scenery and wildlife is spectacular and as we started north we continued to effortlessly pick off birds. We saw (new-to-this-trip) black redstart, booted eagle and alpine swift.

Crossing into Castile and León brought an altogether different landscape. The high flat plains are seemingly endless and monoculture is king: think USA midwest. It's possible to drive for miles and see literally nothing but massive fields, which - if you're lucky - just might be in slightly different shades of green or brown.

Every so often, a tiny, sleepy village with improbably narrow streets - invariably also featuring protruding eaves together with low-slung power and washing lines - hindered progress. After the umpteenth almost identical village set in almost identical landscape, complete with what appeared to be an identical-and-tiny older woman staring quizzically at us, we sensed the onset of insanity: it was time to find somewhere to overnight and have a whiz out on the bikes in an effort to find something as interesting as a tree, perhaps.

And so, we're at the coordinates shown (pic).There are no trees but, once out of the cocoon of the truck and amongst the landscape, there is still a wealth of stuff to encounter. Traditional farmland songbirds are doing very well in subtle areas of ley land and waysides. Cicadas and other insects, too, are indignantly going about their business; in spite of dodging the ever-present dustings of what must be the biocide capital of Spain.

Completely unexpectedly, in these visually baron lands, we also saw some top predators in the form of red fox, marsh harrier, red kyte and lesser kestrel. Hmmm, there's definitely more going on than is immediately obvious.

Then, a mega-bonus and a first for both of us; a great bustard nonchalantly strolling around bang in the middle of a cereal crop field. As dark drew in there were even more surprises with calling corncrake and one of the darkest and most spectacular night skies we've seen for years.