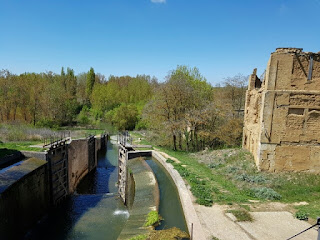 Last night's stopover turned out to an unexpected pleasure and the day started well with more great bustard sightings and some black-eared wheatears as a bonus.

Today's the day we have to catch the ferry back to England but rather than head straight up to Santander we put about three hours in and then looked for some likely landscape to have an extended lunch, pootle out on the bikes, and try to do a bit more nature watching.

The coordinates show are where we've ended up and it's a cracking spot. It's a flight of locks (pic) on a disused canal called the Canal de Castilla, which is clearly an important heritage piece that's well celebrated. The canal would appear to run for some considerable distance and would undoubtedly provide a good theme for a future trip. Where we are, there are lots of information boards (all in Spanish) that explain the locks, various disused buildings, and which give directions to the next interpreted features. We were able to follow the canal for about 10 kilometres (in the time available) on gravel trails that ran alongside it and found a few bird-hides en route.

The birdlife is good and - probably thanks to ever-Increasing temperatures and clear blue skies - insects were out and about in force. I've seen some huge black bees that I'll need to try to identify later and numerous butterfly species, including a pair of swallowtails.

Altogether a top place that, as is so often the case, we simply chanced upon by bumbling towards interesting looking features on the satnav.