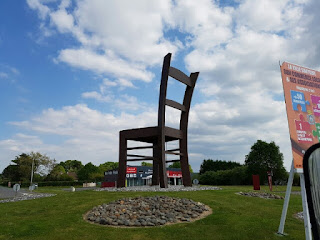 It was another cracking overnighting spot last night and as we set off this morning we were lucky enough to see a fleeting glimpse of a hoopoe on the wing. It wasn't the best sighting, but a hoopoe it surely was.

It was an early start as the first port of call today was the des Dougnes parkrun at Cubnezais; a splendid rural location a few kilometres north of Bordeaux.

Like the parkrun we did in Rouen over Christmas, this too was a sparsely attended affair; but no less welcoming as a result. The organisers had even brought flasks of tea and coffee, as well as biscuits and little chocolate eggs for everyone to share at the finish.

We'd imagined we'd be the only foreigners there but very quickly realised that more than half the attendees were English, Dutch and Australian. Indeed the very first thing we noticed on arrival was a woman wearing a Dewsbury Road Runner's race vest... ah well.

It turned out that that the English there all had 2nd homes in France, the Aussie now lived in Bordeaux and the Dutch lady helped out with organisation.

All in, it was an enjoyable if tough event and Emma performed really well with her first ever female-category parkrun win.

After leaving, we started heading Spain-ward but quickly came unstuck by getting snarled in traffic on the autoroute that traverses Bordeaux. It's been the same every time we've done it, it's just a wretched stretch of road.

Fed up of inching towards Spain, I just baled and started winging it on a series of smaller southbound roads. It proved to be a longer (distance) but altogether more relaxed and interesting drive complete with quite a few good examples of roundabout art (pic). I'm not sure what the story is with this but it's fairly prevalent in France and certainly brightens the day.

Finding an overnighting spot proved a bit troublesome tonight but, hey-ho, that's sometimes just how it is. We're hunkered at the coordinates shown now and though it's right enough the flora and fauna is more redolent of England than anywhere else in France we've been - probably due to the micro-climate associated with being in the foothills of the Pyrenees.