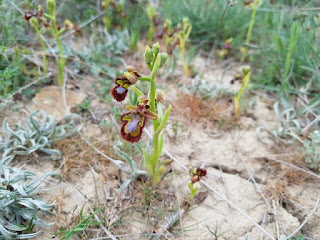 It's been a mega-busy day, today. First up was crossing the Pyrenees. The pass we used was brutally steep on the French side and for about an hour we were climbing in thick cloud with very poor visibility and huge drifts of snow butting into the carriageway. It was definitely a full-concentration and low-ratio box job. Backing the odds, we simply took our time and kept the stress on both ourselves and the truck to the minimum possible.

Once into the Spanish Pyrenees, the changes to the fauna were immediately obvious. Within half an hour of crossing the border we'd seen crag martins, griffon vultures, an eagle if some sort that I couldn't identify, red squirrels and black kites.

Of course, the cultural changes were also immediately apparent. It's amazing how different Spain and its people feel and look to France and the French. It's certainly a more dramatic change than most Euro-borders bring.

By lunch we'd reached the abandoned village of Esco. Completely abandoned villages are not that rare in Spain but this is one of the best examples and most well known. It's really odd to wander about the crumbling houses and church; it's also testament to how the Spanish have a far more relaxed attitude to health and safety than your average Brit is used to these days. Crumbling buildings with rotten floors and precipitous drops? No problem, sir; come right on in and go nuts. We did.

A short drive south from Esco saw us fueling up at a palatable €1.25 per litre, knocking off a casual hawfinch sighting (feeding in a coniferous shrub, roadside), and then arriving at Bardenas Reales Natural Park.

This arid park, which is a combination of desert, steppe and weird geological formations was recommended to us by Tom McGuigan of 4x4 and Adventure Overland Show fame; and boy do we owe him a debt of gratitude. The park is huge and is only accessible via specified unmade roads and gravel trails. It's known for its odd assemblage of species thanks to the unusual habitat types available and it's totally blown my mind. In a nutshell there are so many bird species I just plain don't recognise that it's been genuinely unsettling. Probably best not to even start thinking about some of the orchids (pic)...

Of the bird species I have recognised, some of the more notable are: hoopoe, bee-eater, Montague's harrier, corn bunting, marsh harrier, black kite, serin and woodchat shrike. I've been trying to identify some smaller warblers and larks (the likes of which are totally new to me) for a couple of hours but the jury is, so far, still out.

Also encountered have been a few red foxes (that are very casual about human presence) and a pretty impressive amphibian chorus from an irrigation channel close to where we're parked for the night (coordinates).

Sensory overload... and we're literally only just entering the vastness of the park, this looks like it's going to be good...