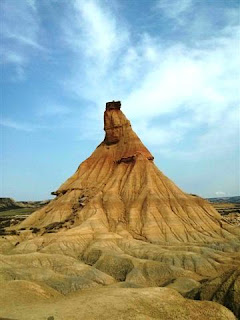 The senses-overload thing continued from first thing this morning. An hour spent wandering around the overnighting spot brought even more new birds and we also found quite a few large mammal tracks around and about.

Driving through the Bardenas Reales was as rewarding as we'd hoped it would be with some truly spellbinding landscapes (pic) and just brilliant natural history interest.

The designated trails through are easily passable and don't require an overlanding vehicle: there were a few around, though.

Because we were so impressed we've hung around the park the whole day and have both spent a good chunk of time out on the bikes amongst it. As good as overlanding vehicles are, there's nothing like biking through somewhere to really bottom it out.

We're at the coordinates shown now and hunkered for the night. About 200 metres away is a small pond and the noise from tiny frogs that we watched earlier there is bonkers. As small as they are they're churning out all manner of squeaks, whistles, croaks and trills.

I haven't been able to identify all the birds we've spotted, but here are some more (notable species) that we're sure we've seen: Thekla Lark, Cetti's warbler, little-ringed plover, lesser kestrel, black-eared wheatear, white stork, water rail, fan-tailed warbler, quail, and great grey shrike. There are about half a dozen more species that I think we could reasonably claim but we don't like to do so unless we're sure.

What we are sure about is that the park is absolutely worth a visit and is undeniably one of Europe's must-see places.