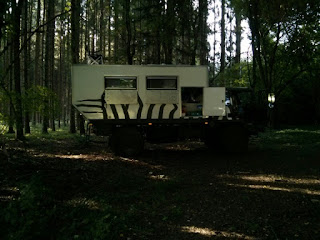 We started early again, 6.30-ish to be imprecise. Today should have been an easy four hours straight down the A8; we should have been all done by 10.30am. However, a couple of minor bumps and more roadworks than it was possible to count meant we were once again subject to multiple sessions of extended time at a stop-start crawl, fully exposed to the beating sun whilst sitting on top of six litres of 6BT: and my side is where the turbo sits! Wet flannels on heads, both sets of cab fans going full chat, and every window and hatch open was all we could do to reduce the wilt.

We didn't actually arrive at our destination until midday, whereupon I literally drove straight into a beech / pine woodland we've stayed at before (pic) in an effort to get as much shade as possible and benefit from the marginally-cooler surroundings. And here we've called home since (coordinates).

It's hard to describe just how lethargic we're feeling, the incessant heat has really knocked the stuffing out of us. I've spent most of the day on top of the truck spraying myself with water, dozing, reading and gazing lazily around whilst Emma's done much the same but in the (much warmer) truck cabin - a judgement she made revolving around perceived bitey insects. When perceived bitey insects are around, I've learned it's better if I just stay quiet.

In spite of the heat exhaustion, we've not been totally inactive; both managing the gentlest of pootles out on the bike for half an hour, just to turn our legs.

Even though we're in pretty thick woodland, we've done OK for mammal sightings with mice, a red squirrel and a very young brown hare (that's obviously not yet worked out it's an open-field dweller) dropping by to see what all the fuss was about.

Hoping for a marginally cooler day tomorrow, not least because 9.00am should see us on the start line of the Riemer Park parkrun just outside Munich... if all goes to plan.