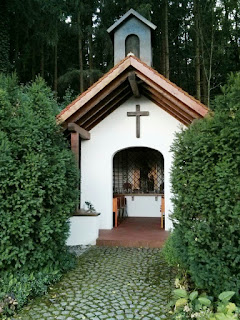 Thankfully, there was a thunderstorm last night that cooled things down a treat. We'd seen it rolling in and, fearing falling trees, moved out of the woodland we were in just before turning in for the night. We shuffled a kilometre or so down the road to the tiniest church it's possible to imagine (pic), and there we kipped instead. I'd marvelled at the tiny church before on another trip, not least because it's unfeasibly immaculately tended. It was a good move, the storm was tree-smashingly fierce.

The church also threw up a good sighting first thing this morning in the form of two melanistic-form 'black' red squirrels squabbling in a tree right at the side of the truck.

First port of call once we got moving was the Riemer parkrun, which we ran in a positively chilly mid-20s. It was still rain-forest humid, though; and pretty tough as a result. The organisers were ex-pat English and a good dozen of the 30 or so that ran were fellow Brits. We've found this pattern pretty common in parkruns on foreign soil and, not unreasonably, conclude it's possibly an insidious Sovereign-driven attempt to re-establish the British Empire; just in a really sneaky and benign way.

Post parkrun, we bumbled gently southeast getting stuck in more of what now seems like routine autobahn traffic jams before peeling off the A8 and making our very zig-zaggy, upy-downy way to the coordinates shown where we're going to kip. We're here: 1) because it's spectacularly gorgeous, and 2) so we can visit The Eagle's Nest tomorrow. Hitler's, that is: not an actual eagle with whom we have such a familiar acquaintance that the use of the definite article is appropriate.

The truck's behaved well since petulantly dumping it's exhaust and then spitting a tyre off the rim, and has positively redeemed itself this afternoon by faultlessly grinding up a five kilometre 25%+ gradient in a time less than I ran the same distance on a pan-flat course this morning; notwithstanding it weighs considerably more than a hundred times more than me. By simple arithmetic, I conclude I'm putting out somewhat less than 145bhp at max heart rate. A slight disappointment.