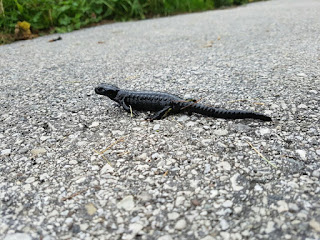 Well, we made it to The Eagle's Nest and it didn't disappoint in as much as it was predictably disappointing.

I was last here a few years ago and my experience of the actual artefact was pretty much the same then as today, except today - and to my eternal disappointment for Emma's sake - the tops were shrouded in cloud; so the significant consolation prize of the truly exhilarating vistas was lost to us. Here was my take then: https://stevefinder.blogspot.com/2014/06/my-location-austria-trip-day-7-germany.html

On the upside, Emma has now physically touched the heart of evil / least appropriate tourististification of a cultural icon imaginable; and we chanced upon three alpine salamanders (pic) wandering about incongruously on the pathways leading to and from said heart of evil / epitome of chintz. This at least was a major bonus, and a first for both of us.

By the end of the 11-mile hike we encountered a real shift in the weather in the form of stair-rodding rain. It was cold, too, and a real shock to the system.

Done with Germany, we're now in Austria: officially the least motorcaravan-friendly country in the EU (apart from maybe Switzerland). Now, everything is beautiful here and we completely and utterly respect the inhabitants desire to maintain levels of  affluence, order, and national and civic pride. We also understand how motorcaravanners impact visually and otherwise, and fully accept that we actually are - and are generally seen as - an unwelcome threat to the rules of order. In Austria, when not being driven, motorcaravans belong on camp sites. It is the way of things.

So, whenever we overnight here we generally try to hide completely. Tonight we struggled to do that so got snuckled away at the coordinates shown where, in spite of being in a semi-urban environment, the adjoining crashing, beautifully-clear river drowned out any people-noises a treat.

We managed about 27 minutes before two armed Polizei came knocking.

One was a bit ratty, the other liked the truck. We explained we were just traversing and needed simply to sleep. We demonstrated to their satisfaction an understanding of the country's vignette / go-box system but assured them we hadn't used any autoroutes, promised not to use any, and also promised to have no fun at all until we reached Slovenia.

This seemed to clinch it and we were grudgingly given the all clear to stay put until 06:49 tomorrow morning.

It does highlight the ongoing dichotomy. I genuinely hate to see motorcaravans / camper vans littered about...

I think some rum should cure the immediate existential crisis, but it is genuinely ongoing.