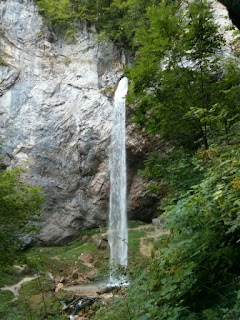 We were away by 06:49 as promised and breakfasted a little way down the road in a cemetery car park. Would it were necessary to prove the fastidious underpinnings of Austrian society, we would present in evidence the watering-can arrangement found in the cemetery. There were four, neatly aligned, all mounted on a custom-made rack, and all secured by supermarket-trolley style locks requiring €1 to unleash.

Austria really is tight. Everywhere is beautifully kept and it's a pleasure to witness. Some day I expect all societies will attain these heady standards: oh, wait...

We had gobsmackingly pleasant scenery for the duration of today's drive, which we punctuated with some logistical stuff.

We: topped up with water (not really knowing what to expect in the Balkans proper) by making use of an ornamental feature / livestock trough situated alongside a ubiquitous village-boundary shrine, did a Hofer (Aldi) shop (mega-cheap!), Emma washed her hair (a reliable source of travelling discord), and we also fuelled up at €1.17 / litre.

After the logistics we became tourists. We visited the Wildenstein Waterfall, which, at 54 metres of single drop lays claim to being the highest single-drop fall in Europe. It may or may not be, but whether the claim is accurate or not, it was worth the 20 minutes or so of hike to have a look (pic).

After we were tourists we came to Slovenia and it feels nice to be back. We're only just over the border (coordinates) but the changes compared with Austria are palpable. The first thing we noticed were distinctly fewer signs that seek to prohibit everything, all of the time.

On the natural history front, the alpine flora over this last couple of days had been spectacular and the sheer quantity and diversity of grasshoppers and innumerable other insects it supports is awesome. Not many birds to report but it's been nice to see good numbers of redstarts and crossbills. We're currently listening to a less-than-familiar owl call and watching a bat of unknown species quartering.