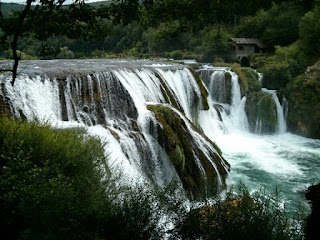 It was a super camp last night but as we emerged from the side road / track we'd been down we were instantly back into the madness of an incessant stream of tourist traffic and bad-tempered drivers.

It turned out that our first intended destination of the day, a national park famed for its unfeasibly beautiful lakes and waterfalls: Plitvički Jezera, was the reason for all the tourist madness. Even though it was still fairly early when we arrived it was rammed. Access to the park cost £30 and there were literally security guards on all non-official entrances ensuring that everyone was herded conveyor-belt like on to a narrow arrangement of wooden walkways on order that everyone could enjoy themselves just as much as everyone else - for exactly the same amount of time. It was a bit like being in an IKEA on a Sunday afternoon, but with the additional trauma of thousands of selfie-sticks... and no hope of compensatory meatballs.

We left without further ado. It's a shame because what we could see of the terraces of lakes, falls and rivers as we approached was indeed spectacular. We may try for it on the way back and get there just as it opens at 7.00am.

The Bosnian border seemed like the logical next move so we prepared for the expected bureaucracy but were thwarted. We were through in a flash with only the obligatory passport scans and stampings troubling passage.

Once in, immediate impressions were good. The landscapes didn't change much but we were suddenly and fairly unexpectedly exposed to countless minarets and a good deal less skank.

In the first town we came to we spotted a place where it was possible to buy local currency so Emma went in to do the deed. It turned out to be a useful thing. The chap she dealt with was hugely welcoming and asked why we were here. Emma told him of our natural history interest and he immediately advised of a couple of spots in the Una national park (the park we were aiming for anyway, as it happens) that he said were beautiful, and that the park itself was good for bears, wolves and lynx. But bad for extant landmines.

We duly took his advice, paid our £4 entry fee and had the barrier lifted on to an unpaved track only suitable for 4x4s or high-ground-clearance, good-traction vehicles.

The bloke's advice was good. It's a truly stunning place. We parked at the coordinates shown where we're hoping to kip and took the bikes out for a closer exploration. Aesthetic jewel in the crown so far has been Štrbački Buk waterfall (pic).

Wildlife has been excellent with purple emperor butterflies, a new-to-me species of bird in the form of a middle-spotted woodpecker and an absolutely astounding deep-dusk sighting of a huge wild boar. I was out of the truck at the time with binoculars, he saw me, agitatedly grunted and snorted, then started moving towards me before bottling it and legging it into undergrowth. I confess it was a little bit scary.

As night's fallen proper, we've also been treated to one of the best night skies seen in a long time.

There is - as we were advised - omnipresent evidence of landmines risk: we haven't strayed from known-good tracks...