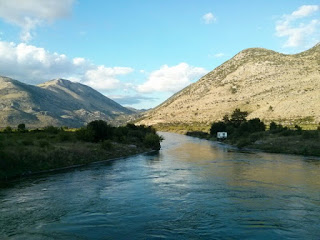 First up was an enforced visit to Mostar. We had little choice but to drive through as BiH doesn't (yet) do much in the way of bypasses, ring roads or motorways. It has a reputation as the prettiest city in the country and, more chillingly, as one of the bloodiest battlegrounds in the recent conflict.

It is, indeed, a nice place with tree-lined streets and cosmopolitan cafés aplenty. It also still bears the scars of the war with many buildings razed or shot-up as stark witness to the recent past.

Next up was Vrelo Bune, a UNESCO heritage site comprising a village and river valley that combines a pretty setting with some historically significant buildings. It was rammed with tourists and - though nice - didn't particularly stand out.

After Vrelo Bune we had a look at Radimlja Necropolis, a burial ground for a wealthy family dynasty dating back to the 1400s. It was a pleasant way to spend half an hour marvelling at the extravagance of the memorial stones. Free WiFi plus some cheap ice creams put the lid on things.

Speaking of cheap, stuff generally is here. Emma went into a bakery for fresh (baked on the premises) bread, came out with enough to feed a legion, and was only approximately 50 pence lighter.

From the necropolis we entered the deep south of the country and sensed another shift in culture. Cyrillic signs now take precedence, there are fewer obviously expensive properties, more people selling home-crafted food and wares on the roadside and a Romania-like propensity for people to appear out of bushes when you're literally miles from anywhere, exchange pleasantries and then disappear off into different bushes. They're clearly going about some business but quite what it might be, I have no clue. Whatever their plans, they don't seem to includes gringos in a lorry painted a bit like a zebra.

We're at the coordinates shown now where we're going to kip (pic). It's been a brilliant spot for wildlife. There are huge trout in the river, loads of birds (best sightings have been alpine swifts) and the insect-life has been superb. Velvet carpenter bees, forest caterpillar hunters, hummingbird hawkmoths and a convolvulus hawkmoths have been common.

The latter is a first for me and something I was obsessed with as a child. They migrate in from Africa and their party trick is to hover in front of flowers and feed through a proboscis that's about four times as long as their body, which itself is about 50mm. They're beautiful and it's a truly extraordinary thing to see.