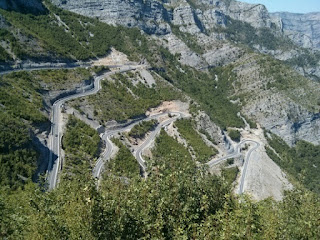 
The people of Albania have continued to be incredibly friendly and welcoming. We've had countless smiles, waves and thumbs up all day.
It's only been a short drive today but it's one of the prettiest we've ever done. There's a massively long and deep gorge that runs along the Albania / Montenegro border and it's that which we've been in most of the day. Getting in took a descent down a dizzying mountainside round a series of hairpins (pic) that rival any of the more famous such passes we've done (such as Transfargarasen or the Trollsvegen etc). It took an age in the low-ratio box to descend, but going so slowly at least made things easy on the truck and allowed plenty of time to wonder at the spectacle. Overheated vehicles by the roadside and the stink of brake pad / clutch material from passing vehicles were not uncommon.

The gorge is just spectacular. The rock strata and sheer gargantuan scale of the surrounding mountains genuinely takes some comprehending. Add to the mix a supremely clean and clear river running alongside the road and it really is chocolate-box stuff.

By early afternoon, we parked up for the day (coordinates) and made the most of the surroundings by having a spin out on the bikes; hard graft given the heat and steep climbs but well worth the effort.

Evening time brought out more bats than we could possibly count.

We deeply regret not having more time to explore Albania, it's absolutely beautiful, the wildlife and people have been excellent and it's for sure got massive potential as a place for any 4x4 camper enthusiasts to have their vehicles earn their keep.