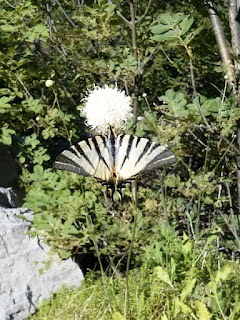 The last bits of Albania didn't disappoint, it was a spectacular drive out to the Montenegrin border.

We weren't looking forward to traversing Montenegro but, in fairness, the east of the country was a pleasant surprise. Litter was still bad, but nowhere near as bad as the industrial-scale landfill we'd seen before and, though drivers were still nutters, there was no obvious resentment towards us just because we were in a motorhome.

Speaking of Montenegrin driving, just for the record, indicators are rarely used, drivers will muscle into non-existent gaps, pull out in front of oncoming traffic, make suicidal overtakes, slam on brakes for absolutely no obvious reason and - just for laughs - do all of the above whilst on the phone. Mobile use seems compulsory, I suspect it even forms part of the driving test here. Even 'professional' drivers in lorries and buses are invariably handset-to-ear on a permanent basis.

The only sensible thing to do is to stay calm and hold uppermost in mind that every driver is perfectly happy to die on each and every journey they undertake.

We were so moved by the difference from the north, west and south of the country that we decided to show our approval by contributing to the economy by buying diesel (€1.21/ l) and ice cream (rather more / l).

By just after lunch, and following the torment of queueing at the Montenegro / Serbia border in the heat of the midday sun, we pretty quickly cleared the formalities required to enter Serbia.

And Serbia is now where we find ourselves (coordinates). The afternoon brought unfeasibly hot weather yet again so for the latter part of the afternoon all we were able to do was loll about on and around the truck in shade. By lying on the top, I inadvertently discovered the less-than-attractive concept of sweat angels.

The place we're at looks like a disused quarry and it's fantastic for lizards, grasshoppers, butterflies and birds. Best sightings have been clouded yellow butterflies, scarce swallowtail butterflies (pic), a 'flashwing' grasshopper of unknown species with a pale blue hind wing, pied flycatchers and a new-to-me semi-collared flycatcher.

We're close to a train line here, too. It's unobtrusive and only very lightly used. I confess I'm oddly fascinated watching trains of the world but to avoid public ridicule will keep that one to myself.

Initial impressions of Serbia are quite favourable, the only oddity to this point seems to be a propensity for fires. We even saw what was obviously an official waste-management site billowing acrid smoke whilst being gently dowsed by a bowser. None of the fires seemed accidental: not sure what's going on yet...