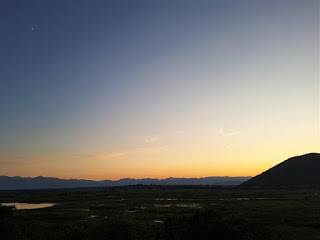 Smoke from one of the fires we'd seen yesterday crept into the truck whilst we slept and led to something of a restless night - in a stinking-acrid-plastic kind of way.

To rid ourselves of the stink we were on the road by about 7.30am and by about 10 had arrived at today's intended location, the Tara National Park right in the northwest of Serbia. It has a reputation for brown bears so we thought we'd give it a go.

As we arrived early we had plenty of time so we've both been out on the bikes and - because they were incredibly abundant - I've spent a while on butterflies (and moths) today.

The list of sightings is long! Amongst the less commonly encountered back in England have been: silver-washed fritillary, high brown fritillary, marbled white, large skipper, map butterfly, and Scotch argus. Day-flying moths have included Jersey tiger and hummingbird hawkmoth.

Our experience of Serbia generally has been very positive. We've had plenty of smiles and thumbs up and have felt generally welcomed and free to roam at will. Even the behaviour of local drivers has been OK.

Like all of the Western Balkans, it's pretty, too. The landscapes have been less dramatic than Montenegro, and certainly Albania, but they're impressive nonetheless and it's fair to say we've been spoiled a bit; so everything in context and all that.

We spent the last couple of hours of daylight at the coordinates shown, quite deep into the forest, in almost complete silence hoping to see or hear bears. It didn't come to anything but hey-ho, there are worse ways to spend an evening.