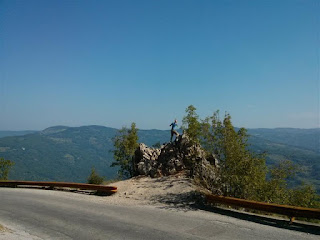 The difficult-to-achieve overnighting spot threw up yet another challenge when leaving this morning in the form of meeting a woman herding three cows towards us on the same unfeasibly narrow road that had caused us all the problems yesterday. All I could do was pull as far to one side as possible and turn off the engine, leaving a gap of about half a cow's width for the lady to work with. She wasn't fazed and simply shooed them towards the gap with some soothing words and some pretty hefty whacks from her cow-whispering stick. Good as gold - and apparently blissfully unaware of Sundays - the cows obediently made the gap, but not without substantial cow-truck contact. It's a good job we weren't in a flimsy. The lady herself had to make the slightest of shimmies, from which - and purely for the sake of completeness of reporting - we are able to conclude that she herself was just over half a (Balkan) cow's width.

After gathering the samples of cow DNA, and some other cow residue altogether more smeary and obvious, it was only about three quarters of an hour's drive to the Kozara National Park where we filled with water using an opportunistic roadside tap and then pretty much called it a day. Emma's biked, I've run (badly) but apart from that all we've done all day is loll in the shade waiting for it to be less hot.

At about 7.00pm, jays started to fly in from all corners of the woodland we're holed up in (coordinates) and congregated in a couple of tall trees. After only about five minutes a total of 26 had mustered, at which point they all silently flew off one or two at a time, and in  more or less single file, deep into the wood. I've never seen such behaviour in jays and though it looks like it was a communal roost thing, I really have no clue what it was all about.

Pic is of Laugh-in-the-Face-of-Danger Emma taking a pic that didn't turn out to be as interesting as the pic of the pic being taken.