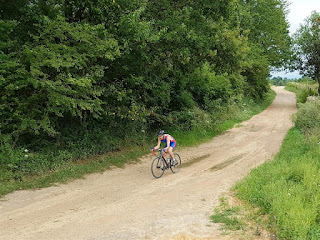 We had another wild boar encounter after going to bed last night. Just as we were dozing off there was a huge crashing and banging from the woods behind the truck and then the unmistakable grunts and snorts of two irascible individuals (not us). Boars just plain own the woods at night!

This morning brought - for the first time on this trip - overcast skies and an absolute godsend in the form of temperatures in the mid 20s. Bliss.

The morning's drive was taken up by a steady bumble through northwest Bosnia and Herzegovina through very pretty landscapes dominated by the gorge of the celebrated river Una. We stopped for lunch alongside the river and even the most casual of glances revealed an astonishing number of fish. Wherever we looked it was just teeming. The Una National Park was established to protect this watercourse and kudos is due. BiH is doing a bang-up job, in this regard at least.

As we approached the Croatian border the last big town we traversed in BiH was Bihać. Fair to say there may be some municipal headaches around and about at the moment because the area was heavily populated by obvious migrants of what looked to be of Middle Eastern descent. They were present in all public spaces in their hundreds. There appeared to be nothing in the way of oversight or control and we sensed a powder-keg unease. The town has the look of Calais of about six years ago...

Ironically then, in spite of the random good fortune brought about by happy-accident of birthplace, we ourselves have had three encounters with officialdom today.

First, we were stopped by police in BiH in an area that was set aside for checking vehicle weight. The policija soon sussed we were a motorcaravan and not a goods vehicle so withdrew their polite request to see my driving licence and vehicle documents, waved us on our way, and courteously wished us good travels.

Encounter two was with customs and immigration entering Croatia. I suspect they wanted to check we hadn't filled the truck - inadvertently or otherwise - with members of the migrant population of Bihać; but also asked us about contraband. We were very truthful about clandestine passengers but Cross-Border-Criminal Emma - fearing internal cavity searches - was slightly more opaque about alcohol. The 'opacity' strategy seemed to be going well until officials demanded that we open up the truck; whereupon we were met with a "wow", a thumbs up, smiley faces, summoning of more officials to take a look, and what appeared to be very genuine well-wishes.

Encounter three happened at the coordinates we're now at where the local Policija tipped up about an hour after we'd parked up, stating someone had reported us as 'suspicious': an arguably reasonable assessment. The officer took one look at our set-up, told us we weren't a problem at all, apologised for intruding, and wished us an enjoyable evening.

Being (ordinarily) painfully law-abiding, we've done our best to comply with the officer's wishes and have duly spent a while birdwatching, biking (pic), generally coming down, and drinking some of the alcohol that we aren't carrying.